Zayo – On Tuesday 2nd, I had a meeting with Tom from B4RN and Neil from Zayo and there is now a plan for what exactly needs doing for the connection from our Head End / Node / Big Green Box to the world wide web (Zayo Line) Work will be carried out at some point in the next 3 to 4 weeks at the dead of night when the internet is less used. Team B4RN arrived and drilled our ducting into the chamber and our fibre is ready to be spliced into the Zayo line.

Net Work Digging Progress – So on Route 1 (SE1) is complete to SE108 Watchgate & along Spur SE108b (High Above Park). Swinny and his team have nipped over the A6 and are now down the back of Garnet Bridge. Next week they will pop back and drill the A6 once the 3 days notice is formally in with the council. They will then be gone up Longsleddale for a month or two going up the West side from Cocks Close first. 90% of the properties up Longsleddale have their connections dug and drilled and ready for completion to the chambers when the team fly past. 90% of the community have also invested in B4RN and some have counted coppers to scrape the £100 and some have invested heavily. Hopefully a good proportion of the valley will be live by mid December. It won’t be long now until Swinny deploys Thunderbird 1 – the big tracked beast that leaves minimal trace on wet ground and can travel anywhere in any weather (as long as the team behind it have tea and ginger bread!!!)

Materials – We have yet to take delivery of the promised large order of duct and chambers so between myself, Swinny and a couple of other volunteers we are collecting materials in an inefficient, time consuming way but we are just about coping. If anyone has a large trailer and can pop to Melling for a load or 2 let me know and we can send you on a hunter gatherer mission.

Fibre Blowing – We had been booked for fibre blowing early October but this has now been put back for a week or so.

Electricity – Our cabinet for the electric meters and switching gear has arrived at B4RN and is being kitted out and should be inplace next week. Thanks again to Logan Tomm for his work laying the foundations and ducting. We are just waiting on Electricity North West to finalise paperwork and then send the contractors to get the spark off the pole and down to the cabinet, after that we will be live and ready to equip the Head End.

Net Work Design – I have been working hard surveying the land and tweaking the routes. After another visit to B4RN today we have a selection of changes now in for re-drawing with local knowledge applied. Many an hour has been spent looking, talking, thinking, walking and remapping with B4RN. Route 3 is now nearly ready for release. We have a confirmed way into the school and again Logan not only laid ducting for B4RN in the 80’s over garnet bridge but had laid at the school a spare duct into the boiler house from the car park meaning that we won’t have to dig through the tarmac. He must have crystal ball.

Terrace Houses – Today down at B4RN I have been asking and learning a few finer details about how rows of houses can be best served. We now have some idea’s to bounce around and finalise for the city of Watchgate, Mealbank, etc. Knowledge Corner – a 12 fibre cable can be blown short distances through 7mm duct. Surface mounted fibre splicing boxes can be mounted on property walls and serve up to 6 properties. It is possible to sling tiny distances between semi detached properties with re in-forced black 7mm duct. Way leaves are required from all properties that have adjacent properties connections attached.

SEHE – Ground works at the Selside Head End are near completion. The Drystone wall is complete (tidy work Mark Jennings)(thanks for all the stone Chris Taylor), gate is hung (thanks Will Hodgson), Land is levelled (handy digger driving Ricky Yates), grass seeded by grandma and Tom & Ari Robinson, Parking area to finish off and hardcore to fill the compound (thanks John Howson) and then we will be ready for a party once it is live!!! Not long now!!!

Shares – I am contacting everyone by e-mail requesting permission to submit their shares application’s to B4RN and only doing so when I have had confirmation. I am doing this batch at a time so look out for an e-mail over the next week or two directly from me (Dan Robinson). If this is not fast enough and you would like your shares to go to B4RN then e-mail me and ill send them on.

Investment Still Needed – We have met our initial target to get the green light but by no means does this cover the full costs. SEHE is estimated at 473,000 and GRHE at 312,000. If you can and are willing to buy more shares or haven’t and can afford at least the minimum of £100 of shares it all counts to the total we will need. 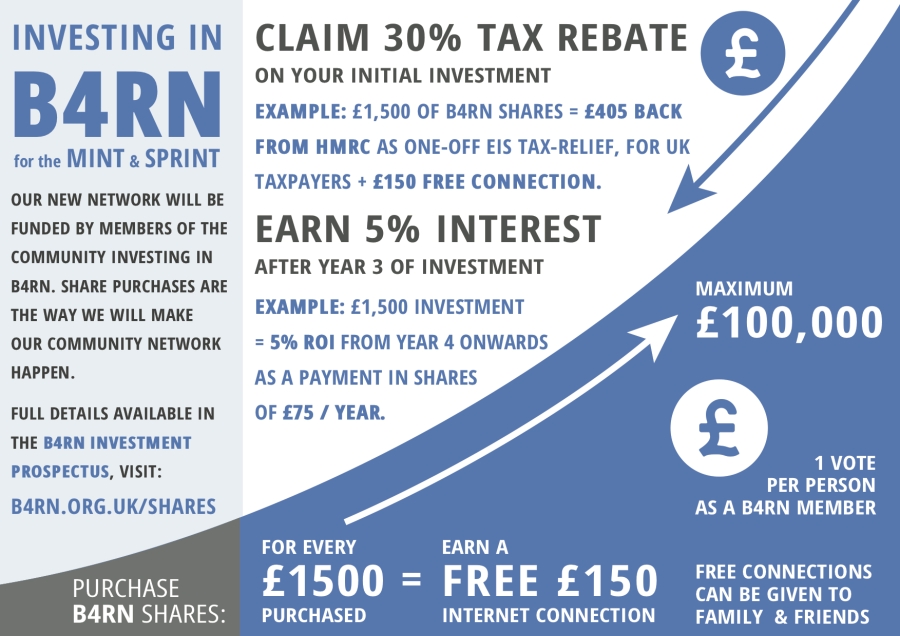 Join the B4RN for the Mint & Sprint Facebook Page